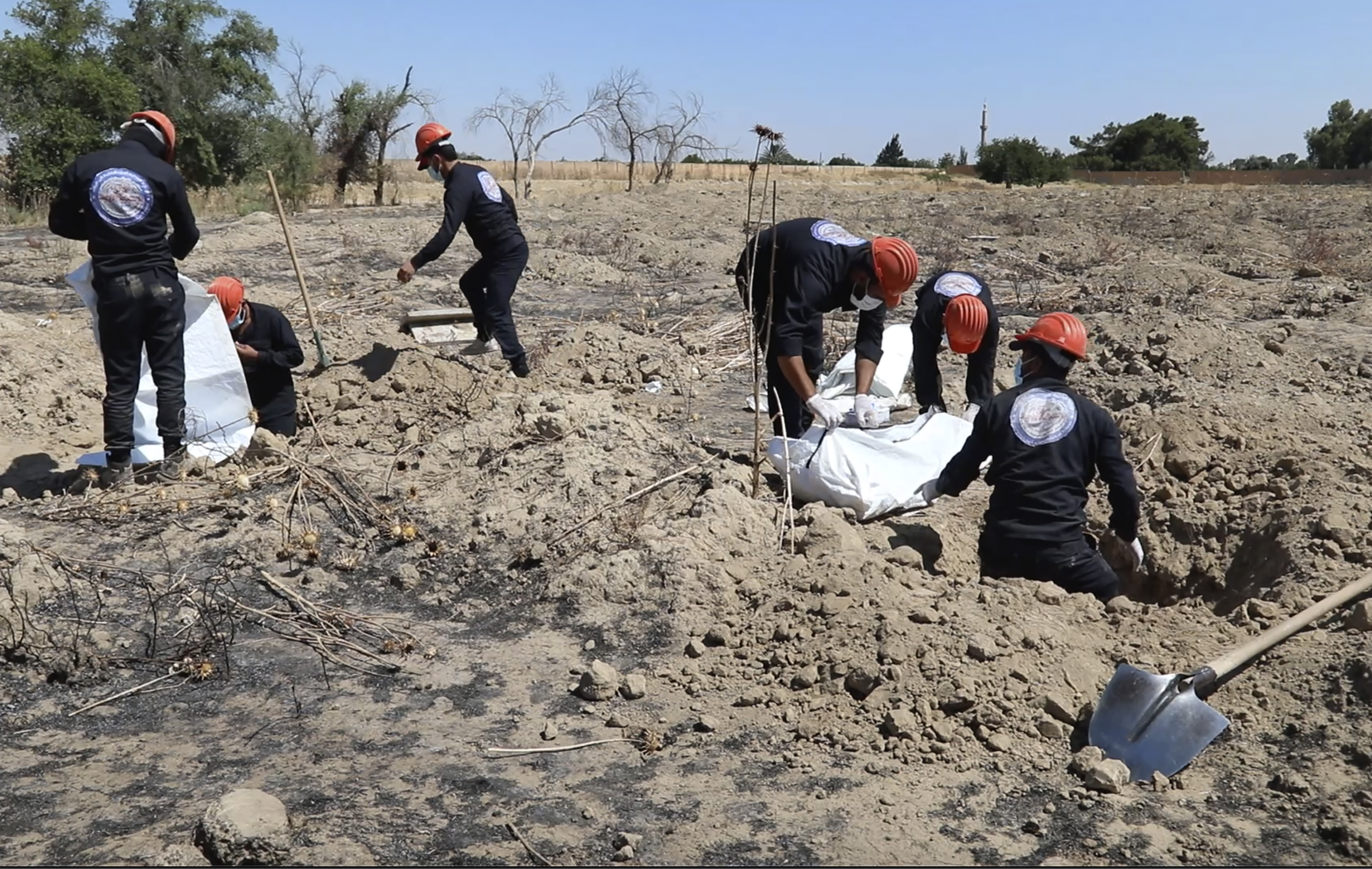 Common pits are still being dug in Syria, which are full of victims of President Bashar al-Assad’s regime, a man known as the “gravedigger” who was heard on the Syrian conflict told US senators.

Dressed in black from head to toe and with his face and head completely covered, the gravedigger spoke of the horrors he witnessed from 2011 to 2018, while working at mass graves in Syria.

He managed to flee the country in 2018, but said he kept in touch with other Syrians who later fled and told him that mass graves were still being dug. The man gave the statement through a translator.

The Syrian war has estimated that 400,000 Syrians have been killed, according to the United Nations, and millions more have been displaced by the conflict.

Prior to the war, the gravedigger worked as a local government employee in Damascus, but in 2011, regime security officers came to his office and ordered him to work for them.

“When the regime demands something, you don’t say no. I wasn’t prepared for these horrors,” the gravedigger said.

After fleeing Syria, he testified before a German court in Koblenz about the horrors he witnessed.

“I am saddened to learn that so many people are being tortured by the Assad regime at this time. I know exactly where the corpses are piled up in mass graves that are still being dug today. they confirmed what I had heard, “he said.

The gravedigger claimed that the longer the war lasted, the longer Assad was in power, and the stronger Putin would be. “We must learn from the lessons of the past and not let these situations happen again,” he added.

Although he was alive, he was bulldozed

The gravedigger recounted the horrors he experienced while working at the mass graves. He recounted a situation in which a man who was thrown from a trailer with other bodies moved, a sign that he was alive.

“One of the workers started crying, he said we had to do something. The officer who was supervising us ordered the bulldozer driver to hit him, and the driver could not hesitate, otherwise he would have been killed. He passed the man in the pit. and I killed the young man who cried, I never saw him again, “said the gravedigger.

CNN contacted the Syrian Foreign Ministry, but received no opinion on the matter.

We use cookies on our website to give you the most relevant experience by remembering your preferences and repeat visits. By clicking “Accept All”, you consent to the use of ALL the cookies. However, you may visit "Cookie Settings" to provide a controlled consent.
Cookie SettingsAccept All
Manage consent

This website uses cookies to improve your experience while you navigate through the website. Out of these, the cookies that are categorized as necessary are stored on your browser as they are essential for the working of basic functionalities of the website. We also use third-party cookies that help us analyze and understand how you use this website. These cookies will be stored in your browser only with your consent. You also have the option to opt-out of these cookies. But opting out of some of these cookies may affect your browsing experience.
Necessary Always Enabled
Necessary cookies are absolutely essential for the website to function properly. These cookies ensure basic functionalities and security features of the website, anonymously.
Functional
Functional cookies help to perform certain functionalities like sharing the content of the website on social media platforms, collect feedbacks, and other third-party features.
Performance
Performance cookies are used to understand and analyze the key performance indexes of the website which helps in delivering a better user experience for the visitors.
Analytics
Analytical cookies are used to understand how visitors interact with the website. These cookies help provide information on metrics the number of visitors, bounce rate, traffic source, etc.
Advertisement
Advertisement cookies are used to provide visitors with relevant ads and marketing campaigns. These cookies track visitors across websites and collect information to provide customized ads.
Others
Other uncategorized cookies are those that are being analyzed and have not been classified into a category as yet.
SAVE & ACCEPT